Immune checkpoint receptors like CD28 and CTLA-4 have been of great interest in the research of cancer immunotherapy. These receptors and their ligands are part of what regulates T-cell activation by antigen presenting cells (APCs) and the immune system’s ability to target cancerous cells. This blog will serve as an outline of possible outcomes of T-cell regulation based on the interactions of T-cell receptors, CD28, CTLA-4, and their ligands CD80 and CD86. 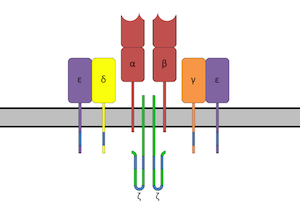 Activation of the TCR and MHC:Antigen complex is imperative for eliciting an immune response. Although the TCR can receive a signal and elicit a response on its own, it typically requires co-stimulation of another surface receptor to bolster the signal and elicit a response. Without co-stimulation, the cell will either become anergic, i.e., it will not activate, or it will undergo apoptosis. 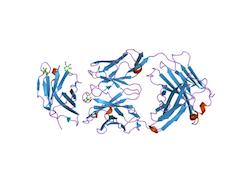 The CD28 surface receptor is presented on naïve T-cells, and is important for co-stimulation with the TCR. CD28 can be bound by the ligands CD80 and CD86 (B7-1 and B7-2) presented by APCs. If the TCR binds a target without CD28 binding one of these two ligands, co-stimulation will not occur, and the T-cell will be anergic. CD28 is also expressed in high concentration, but is a low affinity receptor. This is important to keep in mind because of the competitive binding posed by CTLA-4.

While CD28 leads to activation of the T-cell when it binds CD80 or CD86, CTLA-4 deactivates the TCR when it stimulated by CD80 or CD86 ligands, leading to either anergy or apoptosis. This makes CTLA-4 potentially dangerous in the case of cancer and other diseases: upregulation can lead to desensitization of T-cells to CD80/CD86 presenting APCs, preventing the T-cell from eliciting an immune response when it is necessary. Additionally, CTLA-4 can be expressed in a soluble form, creating binding interference between CD80/CD86 and CD28 and further inhibiting T-cell activation. 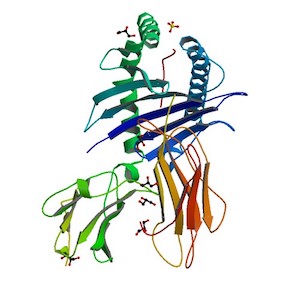 The MHC:Ag complex is the ligand used by APCs to signal T-cell through the TCR to elicit an immune response. The MHC presents a peptide fragment from a foreign molecule for the TCR to recognize. If signaling is successful, the T-cell will be activated and perform its specific function to create the immune response. This will still require co-stimulation of an appropriate surface receptor such as CD28 to complete activation. 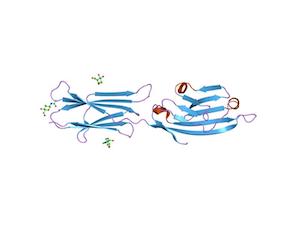 CD80 is capable of binding both CD28 and CTLA-4. This ligand is expressed by APCs, and serves as one of the co-stimulatory molecules of T-cell activation. CD80 has a greater affinity for CTLA-4 over CD28. [1] Higher CD80 concentrations in the immunological synapse are responsible for recruiting greater amounts of CTLA-4 than CD28.[2] Together, these lead us to believe that greater concentrations of CD80 over CD86 can more often lead to anergy or apoptosis. 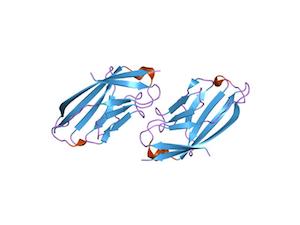 CD86 is a homolog of CD80 that binds the exact same receptors. In contrast with CD80, CD86 is associated more with successful co-stimulation of the TCR, while CD80 is often more inhibitory. This is due to earlier and more abundant expression patterns of CD86 in APCs.[2]

When a T-cell encounters an antigen presenting cell, an immunological synapse is formed where the signaling between the two cells will take place. For successful signaling, the T-cell receptor must bind the MHC, and a co-stimulatory molecule such as CD28 must be bound by CD80/CD86. CTLA-4 is also presented on the surface of a T-cell, and competitively binds CD80/CD86 with higher affinity to create an inhibitory signal. If CTLA-4 signaling outweighs CD28 signaling, the T-cell will become anergic or undergo apoptosis. APCs presenting larger amounts of CD80 are perceived to be more likely to recruit CTLA-4 resulting in inhibition of T-cell activation, while those presenting larger amounts of CD86 will more effectively bind CD28 and stimulate T-cell activation and immune response. 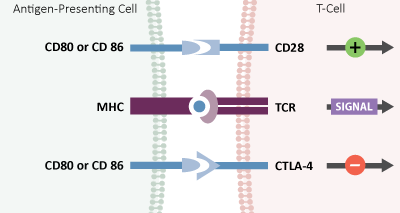