A Monoclonal Antibody Against Amyloid-Beta Plaques Strengthens the Amyloid Hypothesis 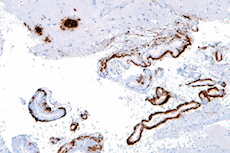 Aducanumab is a novel monoclonal antibody that has been designed to target the amyloid-beta plaques closely associated with Alzheimer’s disease. Specifically, Aducanumab is a murine IgG2a/κ chimeric analogue capable of binding parenchymal amyloid-beta plaques built up in brain tissue, and was shown to remove upwards of 50% of plaques. Treatment of patients with mild cases of Alzheimer’s dementia with monthly intravenous infusions of Aducanumab showed a slowing of clinical decline on several scales measuring dementia’s severity, lending support to the amyloid hypothesis. 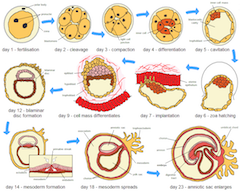 For the last several years, human embryonic research in vitro has been limited due to ethical concerns, but Swedish scientist Fredrik Lanner has been using CRISPR/Cas9 to begin studying the earliest stages of human development. The full story published by NPR discusses how Lanner’s work using CRISPR walks along the fine line between the ethics of studying the human embryo and the scientific curiosity. Lanner’s latest paper on X-chromosome inactivation using this system was published in early August, and can be seen here.

Antibody Validation May Be Taking a Step Toward Product Ranking 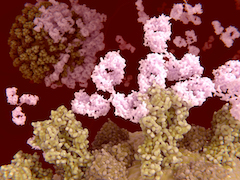 Antibody development companies have been working to establish a standard of validation to potentially resolve some issues with reproducibility. This article takes a look at a meeting that was held amongst antibody developers, where potential resolutions were discussed. One idea is to rank antibodies according to their performance in specific applications, which is paramount to the experiment’s success. This would be an extremely work intensive process to perform for many companies, but it could provide a great benefit to researchers, prevent poor data from impacting the results and reproducibility of their work.

SfN 2016 is getting even closer. Be sure to find ProSci in booth number 123A in Hall H of the San Diego Convention Center. Meeting our clients in person and making new connections in such an exciting atmosphere is something our team is looking forward to. We’ll see you next month!

The JS code beautifier will take care of your dirty JavaScript, assuring a syntax error-free solution.