Home / Research Highlights / A Summary of ProSci’s Research on HIV 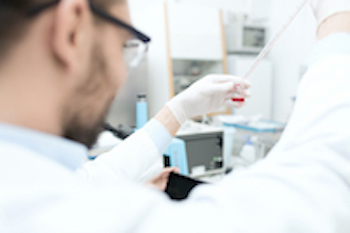 ProSci’s roots lie in the research of Human Immunodefficiency Virus and working to develop a neutralizing vaccine against it. Below is an “abstract of abstracts” summarizing the research performed over the last several years that has built our business from the ground up.

The Human Immunodeficiency Virus type 1 (HIV-1) is the causative agent for Acquired Immunodeficiency Syndrome (AIDS). The HIV envelope glycoprotein (Env) spike is the sole target of broadly neutralizing antibodies (bnAbs). HIV Env is one of the most heavily glycosylated proteins known with 50% of its mass consisting of host derived glycans. Glycans are viewed as self-molecules by the host immune system and hence are non-immunogenic. It is believed that the virus has evolved to incorporate large number of N-glycosylation sites to protect the backbone from antibody mediated neutralization. In the past several years a large number of HIV bnAbs have been isolated and characterized from elite (10-30% HIV positive) patients who have been infected with HIV for 2-3 years. Most of those bnAbs (e.g. b12, VRC01, VRC01, 4E10, 10E8) target the protein backbone, however the new emerging antibodies (e.g. PG9, PGT121, PGT145, PGT128) also interact with glycans at specific locations on the Env protein. Research at ProSci has been focused on targeting the “glycan” using a modified strain of Saccharomyces cerevisiae (brewer’s yeast) for the development of HIV vaccine. We generated triple mutant (TM) yeast strain, which has a deletion of 3 genes (Och1, Mnn1 and Mnn4) involved in the N-glycosylation pathway that results in the expression of Man8 glycans on the surface of its glycoproteins.[1] Few glycoproteins expressed and purified in the TM yeast strain can cross react with the glycan targeting bnAb 2G12. This suggests that the glycans resemble to those on HIV-1, and can be developed as a vaccine to generate 2G12-like antibodies, which are able to target high-mannose glycans.[2] Immunization studies in rabbits with TM yeast expressed glycoproteins as antigens elicited antibodies that are able to bind to various gp120s and gp140 trimers from different clade viruses.[3] However, the sera cannot neutralize the pseudovirus. This implies that the underlying structure of the glycoprotein is important for elicitation of antibodies against the native trimeric Env protein.[4] Current strategy involves training the immune system such that it evolves to elicit anti-glycan antibodies that are able to recognize native trimeric Env protein and neutralize HIV-1 pseudoviruses.[5]

HIV research at ProSci is continuing forward while focusing it’s efforts on eliciting the proper immune response for generating antibodies against HIV glycans.