Home / Blog / The Role of Monoclonal Antibodies & Biosimilars in Research

With more than 800 Research Grade Biosimilar antibodies in ProSci’s catalog, these unique tools are available for researchers worldwide. Explore the world of biosimilars! 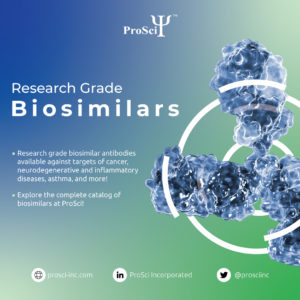 In 1986, the first monoclonal antibody became licensed–an event occurring nine years after the generation of the first monoclonal antibody (mAb).[i] Since that time, the use of these biologics has skyrocketed into a multi-billion-dollar industry. To date, nearly 100 mAbs have gained drug approval with many more in the pipeline at Pharmaceutical companies around the world. Numerous applications, have yet to be discovered in the fields of research, therapeutics, and diagnostics.i,ii

What Are Monoclonal Antibody Therapies?

Monoclonal antibodies are antibodies produced from a B-lymphocyte clone and designed to bind to a specific epitope or antigen.i Because they uniquely target a specific protein, gene, or molecule, they fall under a class of treatments known as targeted therapies. Clinicians use monoclonal antibodies in many therapeutic areas, including oncology, hematology, ophthalmology, infectious diseases, transplantation, cardiovascular diseases, and autoimmune conditions such as rheumatoid arthritis and Crohn’s disease.i

Notably, mAbs are not the only targeted therapies. Another class of drugs, called small-molecule drugs (SMD) has been used for centuries. Early humans through humans today use natural products containing SMDs to treat ailments. SMDs encompass both natural and synthetically produced molecules, and as their name implies, SMDs have low molecular weight (generally ~0.5 kDa) and often have simple chemical structures.ii Manufacturers reproduce identical copies of these compounds via controlled chemical synthesis. While monoclonal antibodies and SMDs both offer target therapy, they have some marked differences—perhaps most notably their size, environments under which they are manufactured, and how they are prescribed.

SMDs and mAbs exhibit different pharmacokinetic properties.  Generally, the lymphatic system absorbs mAbs, and they have limited distribution in the organs and tissues. Metabolism breaks them down into either peptides or amino acids, and they are excreted by the reticuloendotheliual system. Conversely, SMD absorption occurs in the capillaries, and they distribute widely into organs and tissues.ii and they have a short half-life, often only a few hours. The liver metabolizes SMDs primarily through the CYP450 pathway via various conjugation reactions, breaking the small moieties down into larger water-soluble metabolites. These metabolites are often inactive and excretion mainly occurs in the kidneys. Toxicity often occurs when insoluble metabolites accumulate in the body and cannot be easily excreted.

Depending on the target, the ADME of both therapies is considered. Due to their short half-life, SMDs must be dosed at least once a day.ii They are chemically derived, often lipophilic, and therefore, more likely to cross the blood-brain barrier. In addition, the lipophilicity of SMDs enhances their ability to penetrate cells for an intracellular effect.

Some of the differences between mAbs and SMDs demonstrate the advantage of mAbs.ii For example, the long half-life mAbs typically have often translates to more convenient dosing, as many of the products require either biweekly, monthly, or annual administration. Simplified dosing often proves more convenient for patients while improving adherence. The dosage forms of mAbs are usually parenteral, therefore making mAb therapies accessible to more patients—especially those who may have trouble swallowing or who may struggle with oral administration due to hospitalization or other circumstances.

mAb designs can also utilize monomer, dimer, and trimer scaffolds depending on their desired application. This provides an advantage over SMDs opening therapeutic options that had historically been impossible for drug designers. The ability to bind multiple epitopes can greatly increase efficacy in otherwise difficult-to-treat diseases. The multi-target approach is being further researched with the use of small-sized ( < 15kDa) antibodies developed from the single domain heavy chains (VHH) of camelid antibodies. The small size and multi-target specificity can allow for better penetration in hard-to-reach tissues and tumors.

Researchers and drug developers are looking to harness the advantages of both SMDs and Biologics by creating ADCs – Antibody Drug Conjugates. ADCs are antibodies with SMDs conjugated to their skeleton. ADCs are being used in oncology applications to deliver potent and highly toxic small molecules to tumors. Utilizing the specificity of the antibody and the potency of the SMD, off-target and often debilitating effects on patients can be largely avoided by using this approach.

Beyond therapeutics, mAbs shown to be effective in the clinic can help to facilitate laboratory research. Researchers use mAbs (biosimilars) as tools to research novel new therapies and uncover effective off-target applications. With known and approved data on toxicity and efficacy, researchers use these biologics as benchmarks in their studies allowing them to accelerate their findings from bench to clinic.

The scientific world has yet to untap the full potential of antibodies as therapies. As it stands, there are hundreds of phase III trials investigating various uses of antibodies in cancer, neurodegenerative diseases, auto-immune disorders, and many other conditions.  Given the numerous ways in which mAbs are being utilized in the clinic, one can expect their applications and benefits to continue expanding in the years to come. Traditional manufacturing technologies are being optimized and the introduction of novel molecules such as single domain antibodies developed from camelids are also pushing discoveries forward.

With more than 800 Research Grade Biosimilar antibodies in ProSci-Inc’s catalog, these unique tools are available for researchers worldwide Complimenting ProSci’s catalog is a team of custom antibody specialists that provide researchers with expertise in the design, development, purification, and scale-up of antibodies.

Contact ProSci for more information on reagents and custom services.