Antibodies come in several shapes and sizes, leading to a variance in properties and purposes. Below is a broad outline of each of the major isotypes of antibodies and how they are used. Some isotypes can be isolated incredibly easily while others may only be obtainable through recombinant antibody development techniques. Each has it’s own advantages in different fields of immunology. 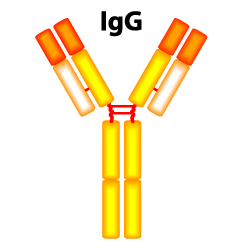 Immunoglobulin G (IgG) is the most common type of antibody in humans and mammals, making them the easiest antibodies develop to produce in large numbers. These can be made against an incredibly wide variety of targets, since they make up the majority of the humoral immune response. When you’re purchasing an antibody, unless otherwise stated, you are most likely purchasing IgG antibodies.

There are 4 subclasses of IgG numbering IgG1-IgG4 with slightly different properties. Some have a higher binding affinity to Fc receptors on phagocytes, others occur in larger quantities. Each of these subclasses maintain the same familiar “Y” shape, but have different properties, specializing them for their purpose.

Immunoglobulin Y (IgY) antibodies aren’t too different from IgG antibodies in appearance, bearing the same ‘Y’ structure. But IgY antibodies are different because they are only found in reptiles and birds, and have an additional domain in the Fc tail . Most antibody development companies will develop these in chickens and collect them from egg yolks.

Due to their distance in the evolutionary timeline, IgYs can be used as anti-mammal secondary antibodies, or for targeting highly conserved mammalian proteins. They do not bind protein A or G, Fc receptors, or activate the compliment system, limiting their functionality within the mammalian immune system and giving them an edge in bioanalytics.

One strange example of this isotype is the green sea turtle’s antibodies, which are asymmetrical IgYs. Check them out here. 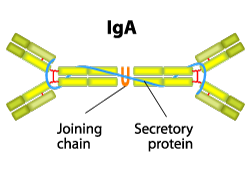 Immunoglobulin A (IgA) antibodies occur less frequently than IgG antibodies in the bloodstream, but make up the majority of immune binding proteins in mucous membranes of the airway and gut. IgAs found in the mucus and intestinal lumen are termed secretory IgAs (sIgA), and prevent potentially harmful antigens from binding or entering epithelial cells that line these tracts.

There are 2 major subclasses of IgA. IgA1, or serum IgAs are found in the blood serum and the lymph primarily and serve a similar purpose to IgG antibodies in activating humoral immune response. IgA2 makes up the majority of secretory IgAs found in mucus membranes. 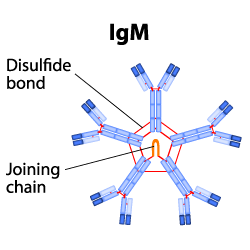 Immunoglobulin M (IgM) antibodies are the largest of these isotypes. These giant immunoglobulins can come in pentameric or hexameric form, where each monomer is similar in structure to an IgG antibody. The IgM polymer forms in a star shape, presenting 10-12 binding domains for different antigens; however, not all of these sites can be occupied at the same time due to limitations in space. They are often expressed as cell surface proteins on immature B-cells, but also may be found in the serum.

IgMs are typically observed in large amounts the early stages of new infections. B-cells create IgM antibodies as a first line of defense. Their large size gives them excellent binding avidity, and can pick up trace amounts of infection to mark for recognition by phagocytes. On the other hand, this size also prevents them from freely diffusing through interstitial space. 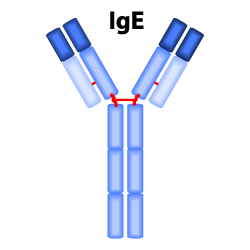 Immunoglobulin E (IgE) antibodies similar to IgYs in their structure, but are also found in mammals, making up around 0.05% of immunoglobulins in most humans. Because of their strong correlation to allergies, inflammatory diseases like asthma, and even some autoimmune diseases, researchers have taken a great interest in trying to understand their purpose in immunology. These antibodies are still somewhat obscure, but some drugs targeting them and their pathways have been developed, including omalizumab for the treatments of allergies which prevents IgE activity by binding their Fab domain. 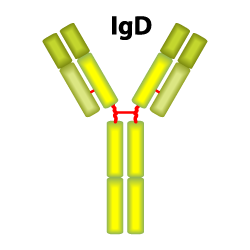 Immunoglobulin D (IgD) antibodies are the least understood of the isotypes listed. These antibodies are mostly expressed on the surface of immature B-cell just like IgMs, but are also similar in shape to IgG antibodies. Though they may potentially play a role in allergic reactions, their function is mostly unknown. Some speculate that they may be left over from the early evolution of the immune system.