Hybridoma technology is the core technique used to develop monoclonal antibodies at ProSci. A hybridoma is a single cell that consists of a cancerous myeloma cell and an immune B-cell which have been fused together into a single body with 1 nucleus and chromosomes from either cell. When fused to create a hybridoma, the cell will maintain both the ability to produce a single antibody and replicate indefinitely, essentially creating an antibody production factory in vitro.

First, a host species like BALB/c is selected, and several are immunized with the target antigen to create B-cells which produce the desired antibody. Serum is collected from each, and titer testing is performed to find the host which has created the most antibodies. This host is selected for Phase 2.

B-cells are harvested from the spleen of the selected host and then fused with myeloma cells that originated from the same species. This fusion is typically performed with dehydrating agents like polyethylene glycol. HAT media is then added to the culture, which is a series of enzymes that prevents the replication of unfused myeloma cells. Of the three cell types present, only hybridoma cells are able to survive in culture with HAT media, successfully isolating them.

The isolated hybridoma cells are screened through an assay like ELISA to assure the development of the correct antibodies. The hybridomas that test positive for the antibody of interest are then subcloned in order to produce a stable cell line which can continue to secrete the desired product.

Do not let this outline fool you! Developing hybridomas for target antigens is a delicate process, and getting the correct products is not as easy as 1,2,3. Do not hesitate to contact us at ProSci if you are having difficulties obtaining results.

Biologist Georges Köhler and biochemist César Milstein were the first to develope a method of hybridoma development to generate monoclonal antibodies in vitro. They had originally been working to fuse myeloma cells with immune cells in order to study the effects the cancer would have. Their work lead to the accidental invention of the hybridoma in 1975, which the two realized could become a phenomenal method for producing monoclonal antibodies in large quantities. Surprisingly, the two never patented the invention: whether it was an ethical decision or an economic blunder is still debated. Köhler and Milstein received the 1984 Nobel Prize in medicine for the revolutionary method. 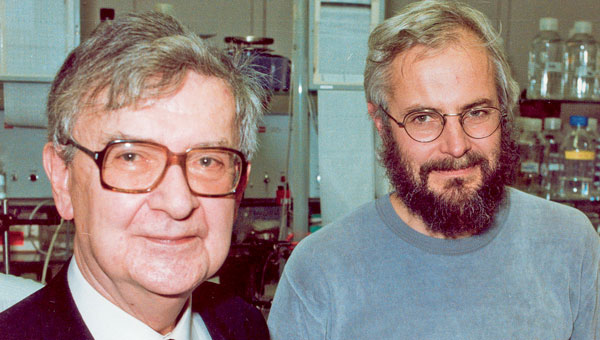 Corley, Ronald B. A Guide to Methods in the Biomedical Sciences. New York: Springer, 2004. Print.