As of May 2022, a highly contagious influenza virus continues to wreak havoc on domestic bird flocks across the United States. Millions of chickens and other fowl are dying or being killed to stop the spread of an HPAI (highly pathogenic avian influenza) – to date, the H5N1 variant has been detected as the dominant strain. 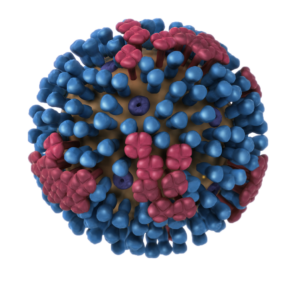 There are four species of influenza viruses: A, B, C, and D.

Human influenza A and B viruses cause seasonal epidemics of disease (known as the flu season). Influenza A viruses are the only influenza viruses known to cause flu pandemics and are responsible for most cases of severe illness of “the flu”. Influenza A viruses are divided into subtypes based on the two surface proteins of the virus: hemagglutinin (H) and neuraminidase (N) with different combinations of subtypes of H and N, such as H5N1, H1N1, and H3N2.

Influenza outbreaks are cyclical and are known to peak and subside with time. The outbreak of the HPAI in the U.S. right now is peaking and growing to be the worst on record.  According to Food Safety News (1), the 2015 outbreak affected 48 million poultry birds where three variants were detected, the H5N1, H5N2, and the H5N8 (2).  The 2022 H5N1 outbreak is showing to be quite virulent spreading rapidly through flocks in multiple States. In an already unstable food and supply chain network that is recovering from the impacts of the COVID pandemic, the 2022 avian flu outbreak can have negative impacts on an already stressed system as death and culling numbers continue to climb.

These outbreaks are not limited to the U.S. and are seen regularly worldwide. They affect more than poultry and humans as swine-specific viruses (H1N1) have been known to impact food supplies and cross over to infect humans. The H5N1 avian flu virus along with several other variants have been reported by the Agriculture and Consumer Production Department throughout the world (3). The Global AIV with Zoonotic Potential Situation Update is primarily limited to livestock and wild animals, while the influenza virus in humans continues to be closely monitored and surveilled weekly by organizations such as the CDC (4)

Detection and surveillance of these HPAI strains continue to be at the forefront of virology and infectious disease research. From bench to diagnostics to antiviral therapies, the development of more sensitive and sophisticated detection systems and more effective therapies in both humans and animals will become increasingly important.

For  17 years ProSci has been providing researchers with several tools to help aid in the research and detection of influenza virus and their respective structural components:

Explore ProSci’s catalog of influenza reagents or get in contact with our antibody experts to help you find the right reagent for your project.